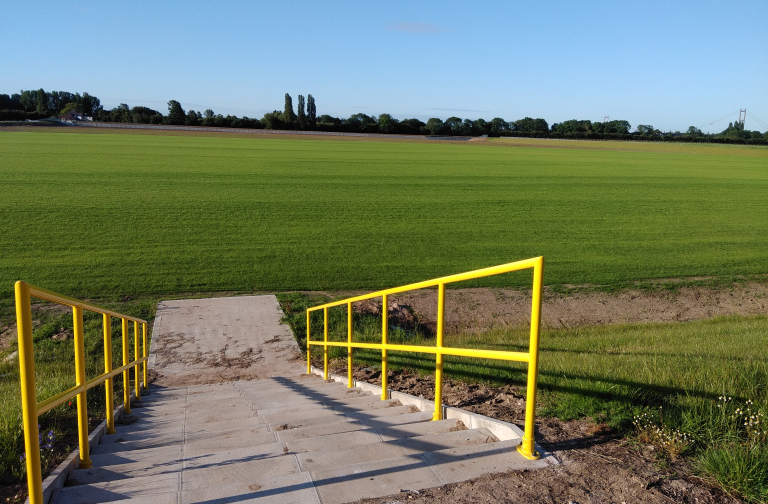 We are delighted that the Anlaby and East Ella Flood Alleviation Scheme has won both the Infrastructure Category award and Project of the Year award at the Royal Institution of Chartered Surveyors (RICS) Yorkshire and Humber Social Impact Awards 2020. As a winning entry, the project will now go forward to the RICS Social Impact Awards National Grand Final on Thursday 24 September.

The Anlaby and East Ella Flood Alleviation Scheme (AEEFAS) was developed by East Riding of Yorkshire Council in partnership with Hull City Council and the Environment Agency as part of a suite of schemes aimed at reducing flood risk in the Hull and Haltemprice areas, having suffered devastating floods that affected hundreds of homes and businesses in 2007.

Colas UK Projects in a joint venture with SIAC Construction fought off strong competition to secure the scheme, which was one of the first civil engineering schemes on the new £1bn YORcivil2 Contractors Framework. Having secured the contract the team started work on the £3.8m second phase, which involved the construction of a new flood water storage lagoon on the site of the previously demolished Sydney Smith School on First Lane in Anlaby, with a capacity of around 130,000m³.

In making their decision the judges said: “The Anlaby and East Ella Flood Alleviation Scheme is an outstanding example of a project devised to address the devastating human and social impacts of flooding. The project comprises a 1.5kilometre 1.8 metre diameter tunnel, a 120,000 cubic metre lagoon and the infrastructure between, all of which is designed upon the principal of gravity flow, which simply allows it to work without the risk of operative intervention and hugely reducing its carbon footprint. It was clear to the judges that the wide-ranging collaboration by East Yorkshire Council, Hull City Council, the Environment Agency, Yorkshire Water and numerous other public agencies and stakeholders through the planning, modelling and construction phases has led to an exceptionally executed project”

Read more about the project here