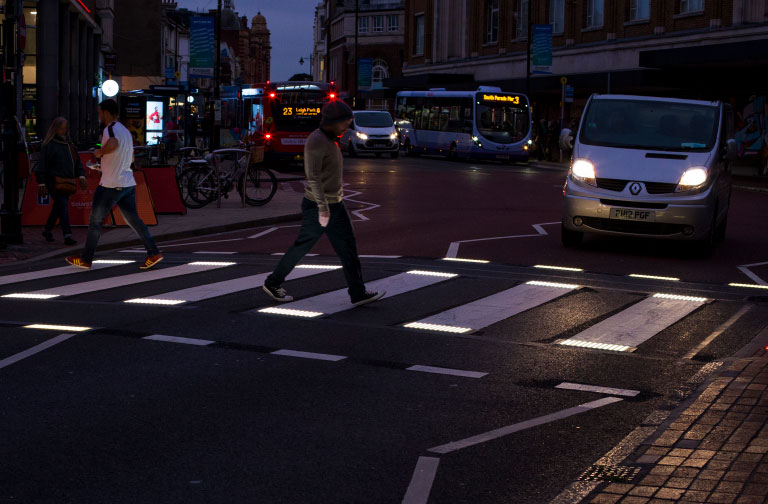 Flowell arrives in the UK

The Flowell pedestrian and cycle crossings technology has been developed by Colas teams, and trialled at various sites in France, where initial feedback has shown it to be very beneficial.

The Portsmouth site on on the junction of Clarendon Road and Palmerston Road, is the first of its kind in the UK and was unveiled at a ‘switch on’ event as part of the We Shine a Light Portsmouth Festival between 18th-20th November. The new crossing will light up when triggered by sensors, enhancing visibility for users, making the space easier to read by clearly defining areas, facilitating mobility, and helping improve the way people use public space. It is also designed ensure better compliance with traffic regulations and encourage users to behave more calmly at busy intersections.

Flowell can also adapt according to traffic levels and needs via a dynamic and interactive road management system. For example, it can be adapted to give priority to certain vehicles during specific time times of day or allocate space for a dedicated use such as temporary outdoor dining space for restaurants.

The totally unique solution is made up of panels comprising of LEDs encapsulated in a multilayer substrate which are connected to the electrical network. They can be glued on or embedded into pavement, which preserves the surface’s initial grip and skid resistance. It is designed to last and can be modulated; it can withstand thermal expansion and vehicle loads and the size and brightness can be tailor-made to suit every situation.

The site in Portsmouth will be monitored to determine its impact on behaviour and help determine how it could improve road, rail and airport infrastructure in the UK and around the world.

"Flowell stems from a design process led by Colas teams, and it therefore benefits from our extensive technological expertise in transport infrastructure. Following the initial laboratory tests performed at the Colas Campus for Science and Techniques, it is now entering an trial phase in real life conditions. We are delighted to be installing the UK’s first Flowell crossing in Portsmouth as part of this phase, and we look forward to sharing the results of this trial with the industry.”

Cllr Lynne Stagg, Portsmouth City Council's Cabinet Member for Traffic & Transportation, said: "We're always looking for new ways to improve road safety and I'm delighted we're the first place in the UK to use this innovative new technology. We chose this crossing because it's very busy particularly at night with all the bars and restaurants, we want to make the crossing more visible and encourage more people to cross there safely."

Several trial sites have been deployed to test the solution in real conditions in Europe. For example, in Mandelieu-la-Napoule on the French Riviera, an intersection known to be hazardous was equipped with the solution. Driver behaviours were studied before installing the Flowell solution and measurements have been conducted since. A marked change was observed, with calmer driving, greater awareness of risks, and thus enhanced safety for pedestrians.