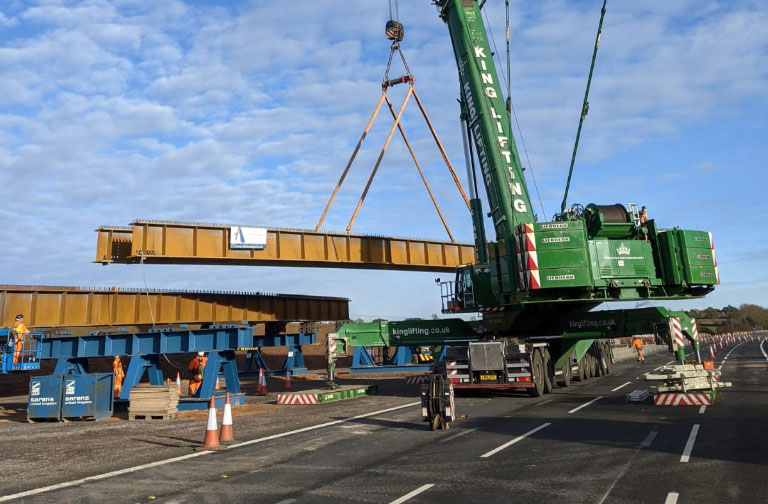 The A46 Stoneleigh junction improvement project reached a significant milestone last weekend with the arrival of the final bridge steel beams, a key step in the overall programme of works.

The beams were lifted into place over two weekends, with Storm Arwen adding an extra element to the extensive planning during the first weekend of lifts on 27/28 November because of high winds. With each of the beams measuring 36m in length and weighing 70 tonnes, the logistics of transporting the beams from their off-site manufacturing base at Allerton Steel in Yorkshire, required significant planning by the Colas team and their supply chain in order to deliver the new beams to the A46 site and safely off load them onto temporary trestles.

Project Manager Andy Bond explains “For the traffic management we had to request a temporary traffic regulation order to book the road space for the full closure, liaising with National Highways Area 9, other local schemes, Warwickshire County Council, Coventry City Council and Solihull Council to ensure the diversion routes were agreed and timing of the closures was acceptable. Our Colas Traffic Management colleagues installed the full closures and diversions and maintained them throughout the weekends as well as several temporary works designs that were also required to enable the work, including for the working platform, the crane and the trestles.”

The bridge steelwork comprises of eight individual beams bolted together to form four braced pairs, each weighing about 70 tonnes. The beam pairs are 1.3m tall, 36m long and 2.8m wide. Allerton Steel, the steelwork subcontractor, used GCS Johnson a specialist haulier to transport the steelwork to site using extendable (trombone) trailers and King Lifting’s 750 tonne crane to erect the steelwork. The beam pairs were delivered from Peterlee in Durham, where they had been sent to be shot blasted before they were delivered to site. The journeys from North Allerton to Peterlee, and Peterlee to site, had to be conducted under movement orders as the vehicles were classed as abnormal loads, due to their length of over 40m and gross vehicle weight of over 103 tonnes. The delivery vehicles also required Police escorts throughout their journeys.

Cllr Wallace Redford, Warwickshire County Council Portfolio Holder for Transport and Highways, said: "It's great news that these essential bridge components for the Stoneleigh Junction improvement scheme have been safely lifted into place by our contractors, Colas.  The essential road closures to allow this to happen went as scheduled and were not in place for a moment longer than they needed to be. I would like to thank residents and motorists for their continued patience and support for the scheme.

"The Stoneleigh Junction improvement works will bring real improvements to the experiences of local residents and commuters who use the A46 and the nearby roads that very frequently suffer from congestion and is a key part of ensuring Warwickshire residents are supported through excellent transport infrastructure."

With all the steelwork for the bridge delivered, the team will now begin phase 3 of the project which will comprise of construction of the new A46 Stoneleigh bridge and the new roundabout section over it once the bridge is finished. To minimise disruption to the strategic road network, construction of the new bridge, which is expected to weight approx. 740 tonnes, is being undertaken ‘offline’ and will be installed in its permanent position using a bridge slide method in mid 2022. Once the bridge deck is cast it will be jacked to full height in the off-line fabrication area. It will then be lifted using a self-propelled modular transporter (SPMT), carried into position across the A46 and lowered onto the new abutment walls.