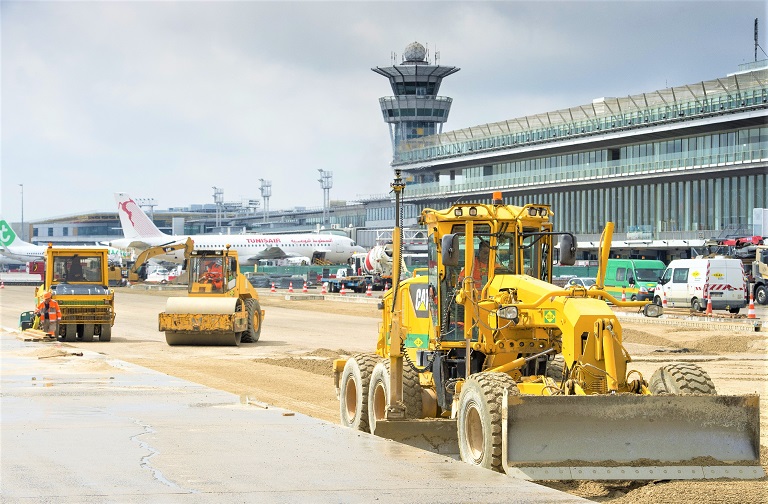 Re-building the runway at France’s second biggest airport is not an everyday occurrence… The renovation and upgrading of runway 3 at Paris-Orly airport, built soon after the WWII and extended in 1959, had become essential. Colas Île-de-France Normandie secured the contract for the project, as part of a consortium with Colas Projects, Spie batignolles valérian, JDC Airports and Cegelec.

Between July and December 2019, teams pulled off a technical, logistical and environmental feat. With an average of 33 million passengers per year and 627 flights per day, deadlines were tight. At the height of operations, 700 people were working on site, alongside more than 150 machines and heavy trucks. As part of a circular economy approach, the concrete removed from the former runway was recycled in situ and either re-used for the new runway or sent out for use on other sites in the Paris area. During peak periods, Colas mobilised 700 employees, from some ten Colas profit centers in France and internationally.

Allied Infrastructure, part of Colas Ltd in the UK, were called upon by the Colas Group to be part of the team completing the major renovation works on Runway 3 of Paris-Orly airport which re-opened in December of last year.

The intensive 18-week project was completed on schedule and encompassed three key phases, consisting supply of machinery and aggregates, closure of two runways to allow for the rehabilitation of main intersections and, finally, reconstruction of runway and taxiways. From an environmental standpoint, a recycling plant specially installed along the runway meant that 200,000 tonnes of existing materials could be re-used, thus negating 13,000 truck trips – 6,500 for evacuation to landfills and a further 6,500 for the transport of materials to the construction site.

The experienced team from the UK assisted the fast-paced scheme by carrying out over 8,200 linear metres of rock sawing through roller compacted concrete and heavily reinforced flint concrete and steel. Additionally, the Allied team collaborated with Colas to enable trenching before new ducting could be installed on the runway. With on-site machinery unable to cut through the reinforced materials, Allied’s specially modified, 200mm wide rock saw successfully breached the concrete, resulting in additional rock sawing works being rewarded and timely delivery of the programme. Impressive technical feats.

Take a look at this eye-catching video which showcases the full scale of the major project, as Allied Infrastructure worked together with Colas Group to complete runway renovation works at Paris-Orly Airport.